Of all the events that took place in 1969, none have been subject to as much scrutiny, conjecture, analysis or celebration as the Apollo 11 spaceflight.

The mission famously took a crew of three astronauts to the Moon on July 16, and then returned them safely to Earth.

Our fascination with Earth’s only natural satellite stretches back millennia. Some ancient cultures built monuments to it, others worshipped it as a deity. Others still thought they saw in the dried seas of lava (or “maria” as scientists refer to them) a human face – the Man in the Moon.

With a diameter 28 per cent that of Earth’s, the Moon is located about 407,000km away from us at its furthest point.

The Moon impacts the ocean tides, and some say our moods, too.

My cousin Adrian, who was blind and deaf, was nonetheless thrown off-balance by full moons, which kept him awake and strolling outdoors in the middle of the night to head for his beloved swing.

Common wisdom had it that it was the Moon itself that causes a kind of madness, which explains how “lunar” and “lunacy” originate from the same Latin word.

Was it a kind of madness that prompted US President John F. Kennedy to promise in 1962 a manned spaceflight to the Moon’s surface by the end of the decade?

If so, it was lunacy borne of the Cold War, as the US and USSR fought for superiority in whatever realm they could compete – sports, culture, technology, and hegemony.

The Russians had a head start in the Space Race; they had propelled the first creature, Laika the dog, and the first human, Yuri Gagarin, into orbit in the late 1950s and early 60s.

Gagarin returned a hero. Laika, alas, a gentle creature originally discovered wandering the streets of Moscow, perished (from heatstroke, it’s since been admitted), an early casualty in the Space Race.

There would be more.

An investigation found that the blaze had begun under Grissom’s seat, somewhere within the 50km of wire on board the spacecraft. An exact cause was never discovered.

Though tragic, the incident was a turning point; from then on the program became more “coherent”, more streamlined and structured.

In an era of more primitive communications, the Americans could not exactly tell how they were faring against the Russians.

The truth was that the US program was considerably ahead of their Soviet foes. And after the Apollo 1 catastrophe, US efforts were redoubled.

A successful mission required an extraordinary number of things to go right – for every piece of a rocket, every tiny component, to work as designed, but also for the astronauts to know their roles. A minor pilot error on board could have epic consequences. The smallest equipment failure could spell disaster.

The Russians kept experiencing problems in their somewhat chaotic roll-out; the US persisted with a more organised program.

In October 1968 NASA launched Apollo 8, which flew to the Moon, orbited around it, checked it out up close, glimpsed its mysterious pockmarked “far side”, and in what became a famous photograph, watched the Earth rise above the Moon’s horizon.

Apollo 11 was the culmination of an astonishing effort involving billions of dollars and personnel of some 400,000 people to make happen.

On board were astronauts Neil Armstrong, Edwin “Buzz” Aldrin and Michael Collins.

Aldrin, who later legally changed his named to Buzz, campaigned behind the scenes to have the honour of being first to step onto the lunar surface.

It wasn’t going to happen. Armstrong’s more reserved character was favoured by the NASA suits.

And so on the morning of July 16, the rocket blasted off.

The rocket that did most of the flying component of the trip was known as a Saturn 5.

“This beast is best felt,” Collins said of the Saturn 5’s power. “Shake, rattle and roll! We are thrown left and right against our straps in spasmodic little jerks. It is steering like crazy, like a nervous lady driving a wide car down a narrow alley, and I just hope it knows where it’s going, because for the first 10 seconds we are perilously close to that umbilical tower.”

You do notice quite a bit of sexist language emanating from this time period; there are many references to men, mankind, “the hearts and minds of men” and the like. It is one of the reminders that the events took place half a century ago, before the impacts of the feminist movement were widely felt.

After nine hours, the rocket was due for a midcourse correction. By then the rocket was travelling at 10,844 m per second, sufficient to escape Earth’s gravitational field.

On day four of the mission, lunar orbit was reached.

“The Moon I have known all my life, that two-dimensional small yellow disk in the sky, has gone away somewhere, to be replaced by the most awesome sphere I have ever seen,” Collins said.

The astronauts slept in lunar orbit that night.

After breakfast the next morning, Armstrong and Aldrin climbed into the lunar module (LM), nicknamed “Eagle”. There was a 12-minute decent to the lunar surface.

Mission Control can’t communicate with Eagle, and has to go through Collins in the command module (CM), nicknamed Columbia, to communicate with Armstrong and Aldrin. Communications drop in and out.

There’s an electrical problem on board. Computer alarms go off.

Armstrong took over manual control about 150m to the lunar surface. There was an issue with timing that required a different landing spot than was originally proposed.

But with 30 seconds’ worth of fuel left Armstrong found an appropriate spot, and Eagle softly touched down.

Six hours – six hours! – later, Armstrong climbed the 3m down from the module to the lunar surface, followed by Aldrin, who described the vista as “beautiful desolation”.

They collected rock and soil samples and took photos, mostly of Aldrin, who claimed photography wasn’t part of the training, but was perhaps getting revenge for not being chosen to take those portentous first steps.

Armstrong may have uttered “One small step …” but it’s Buzz who dominates the photo album.

They performed experiments, set up equipment and planted a flag.

A few hours later and they were back inside the Eagle. Then after a stay totalling 21 hours, the LM left the Moon’s surface and returned to rendezvous with Collins onboard the CM.

On the return trip all three gave TV interviews in which they thanked those who were part of the program, the American people, and God.

“This has been far more than three men on a mission to the Moon,” Aldrin said. “More still than the efforts of a government and industry team; more even, than the efforts of one nation. We feel that this stands as a symbol of the insatiable curiosity of all mankind to explore the unknown.”

A note was left beside’s JFK’s grave. It read: “Mr President. The Eagle has landed.”

On July 24, the trio splashed down in water 1,450km south-east of Hawaii, where they were picked up by 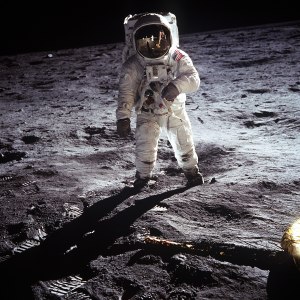